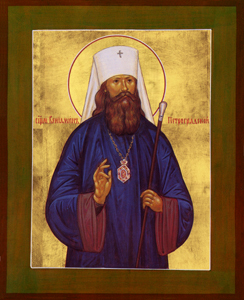 Feastday: March 31
Patron Saint of Persia
St. Benjamin, Martyr (Feast Day – March 31) The Christians in Persia had enjoyed twelve years of peace during the reign of Isdegerd, son of Sapor III, when in 420 it was disturbed by the indiscreet zealof Abdas, a Christian Bishop who burned the Templeof Fire, the great sanctuary of the Persians. King Isdegerd threatened to destroy all the churches of the Christians unless the Bishop would rebuild it.

As Abdas refused to comply, the threat was executed; the churches were demolished, Abdas himself was put to death, and a general persecutionbegan which lasted forty years. Isdegerd died in 421, but his son and successor, Varanes, carried on the persecution with great fury. The Christians were submitted to the most cruel tortures.

Among those who suffered was St. Benjamin, a Deacon, who had been imprisoned a year for his Faith. At the end of this period, an ambassador of the Emperor of Constantinople obtained his release on condition that he would never speak to any of the courtiers about religion.

St. Benjamin, however, declared it was his duty to preach Christ and that he could not be silent. Although he had been liberated on the agreement made with the ambassador and the Persian authorities, he would not acquiesce in it, and neglected no opportunity of preaching. He was again apprehended and brought before the king. The tyrant ordered that reeds should be thrust in between his nails and his flesh and into all the tenderest parts of his body and then withdrawn. After this torture had been repeated several times, a knotted stake was inserted into his bowels to rend and tear him. The martyr expired in the most terrible agony about the year 424.