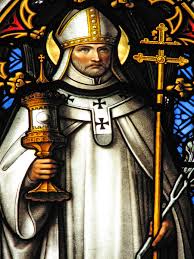 GOD awakens the saints to the reality of His presence in a variety of ways, some of them quite dramatic: thunder and lightning was the way for Saint Norbert.  A relative of the German emperor, Henry V, Norbert was born about 1080 at Xanten, on the Rhine, and spent the first thirty years of his life in attendance at the royal court, where he was a great favorite.  It was a pleasant, amusing, and purposeless existence, although he had already been ordained a subdeacon.

In 1111 he accompanied the emperor to Rome, and although his conscience was awakened when he saw Henry extorting from the imprisoned pope rights that belonged to the Holy See, it was only little by little that he left the court life and broke with the excommunicated emperor.  The decisive moment came for the young man as he was riding a horse through the German countryside one day; when a violent storm occurred, punctuated by thunder and lightning, the horse bolted, throwing Norbert to the ground.  The fall nearly killed him like Paul on the road to Damascus, Norbert emerged from the experience a different man.  His brush with death had revealed to him, in one sickening flash, the enormous emptiness of his life, and he resolved to make amends to God.

He returned to Xanten, found a little hermitage, and gave himself up to prayer and mortification.  He left his solitude only to seek the advice and direction of Conrad of Ratisbon, the celebrated abbot of Siegburg.  Conrad advised study for the priesthood, and in 1115 Norbert was ordained at Cologne.  He returned again to Xanten to start his priestly career.

In his Youth, Norbert’s family had secured an appointment for him as a canon at the collegiate church in Xanten; such positions were largely honorary, although usually given to priests, and people were accustomed to seeing the canons leading very worldly lives.  Remembering his own faults in this regard, Norbert began preaching to the canons on the need for more spirituality in their lives; his listeners, who had no taste for such medicine, laughed in his face and in 1118 denounced Norbert to the Council of Fritzlar as an unorthodox, meddling troublemaker.
The council condemned him only for preaching without proper authorization, but Norbert was stunned by the cruelty of his fellow clerics.  Giving away the remains of his family fortune, he set out for Languedoc in France, where Pope Gelasius II was temporarily residing.  It was winter, and Norbert walked barefoot the entire way.  When he was admitted to the pope, he begged pardon for a sinful life and requested that a suitable penance be given him.  The pope saw the caliber of the man before him and rewarded the saint’s act of humility by giving him permission to preach at will throughout Europe.

Thus vindicated, Norbert began a busy preaching career that took him throughout the French and Belgian dioceses.  In 1119, the bishop of Laon persuaded Norbert to go there, where the canons were no better than they had been at Xanten.  As before, the saint had little success with the worldly clerics; as an alternative line of action, however, the bishop suggested that Norbert found his own community of canons and gave him land for this purpose in the desolate valley of Premontre’, near the city of Laon.  There, on Christmas day, 1121, a new type of religious order was born: the Order of Canons Regular of Premontre’.  The order was an austere one, based on the Rule of Saint Augustine, and Norbert had the satisfaction of seeing it attract canons from all over Europe, even many of those who had earlier rejected his attempts at reform.  A branch for lay people was established at the request of Theobald, count of Champagne; Norbert gave him a small scapular he could wear under his clothes and a simple rule that could be followed in secular life.  This “third order,” or secular tertianship, is regarded as the first to be attached to any religious order.  After making other foundations (one was in Antwerp, where Norbert gained fame by putting to rout a celebrated heretic), the saint went to Rome in 1125 to have Pope Honorius II give formal approval to the Premonstratensians.
There were no longer any doubts about the worth of this holy man.  When he appeared in Germany on a visit in 1126 he was prevailed upon by the hierarchy there to accept the consecration as archbishop of Magdeburg.  Leaving his order under the direction of a capable disciple, Hugh of Fosses, Norbert took up residence in Magdeburg, where he once more became a stumbling-block to Christians who had forgotten the meaning of their faith.  Unchaste priests, laymen who plundered the Church of its property, these and others were soon influenced by Norbert’s authority.  Despite opposition (a mob once attacked him in his own cathedral), the archbishop carried out his reforms and eventually had an improved diocese.
The last achievement in Norbert’s full life was to join with Saint Bernard and the emperor Lothair to uphold Pope Innocent II in his struggle against the antipope Anacletus II.  That fight took Norbert to Rome again, in 1133 ; although the outcome was successful, the effort proved too much for Norbert’s health.  He became ill on his return to Magdeburg and, shortly after his arrival there, died on June 6, 1134.  His order continued to expand after his death and still

Dare to be like St.Charles Lwanga and his CompanionsCool Catholics, Jesus League
The Solemnity of the Ascension of the LordCool Catholics, The Spotlight, We Believe