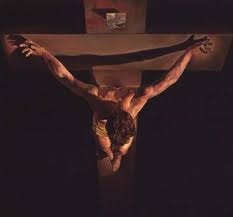 Good Friday and the Cross

On Good Friday, the entire Church fixes her gaze on the Cross at Calvary. Each member of the Church tries to understand at what cost Christ has won our redemption. In the solemn ceremonies of Good Friday, in the Adoration of the Cross, in the chanting of the ‘Reproaches’, in the reading of the Passion, and in receiving the pre-consecrated Host, we unite ourselves to our Savior, and we contemplate our own death to sin in the Death of our Lord.

The Church – stripped of its ornaments, the altar bare, and with the door of the empty tabernacle standing open – is as if in mourning. In the fourth century the Apostolic Constitutions described this day as a ‘day of mourning, not a day of festive joy,’ and this day was called the ‘Pasch (passage) of the Crucifixion.’

The liturgical observance of this day of Christ’s suffering, crucifixion and death evidently has been in existence from the earliest days of the Church. No Mass is celebrated on this day, but the service of Good Friday is called the Mass of the Presanctified because Communion (in the species of bread) which had already been consecrated on Holy Thursday is given to the people .

Traditionally, the organ is silent from Holy Thursday until the Alleluia at the Easter Vigil , as are all bells or other instruments, the only music during this period being unaccompanied chant.

The omission of the prayer of consecration deepens our sense of loss because Mass throughout the year reminds us of the Lord’s triumph over death, the source of our joy and blessing. The desolate quality of the rites of this day reminds us of Christ’s humiliation and suffering during his Passion. We can see that the parts of the Good Friday service correspond to the divisions of Mass:

The Veneration of the Cross

In the seventh century, the Church in Rome adopted the practice of Adoration of the Cross from the Church in Jerusalem, where a fragment of wood believed to be the Lord’s cross had been venerated every year on Good Friday since the fourth century. According to tradition, a part of the Holy Cross was discovered by the mother of the emperor Constantine, St. Helen, on a pilgrimage to Jerusalem in 326. A fifth century account describes this service in Jerusalem. A coffer of gold-plated silver containing the wood of the cross was brought forward. The bishop placed the relic on the a table in the chapel of the Crucifixion and the faithful approached it, touching brow and eyes and lips to the wood as the priest said (as every priest has done ever since): ‘Behold, the Wood of the Cross.’

Adoration or veneration of an image or representation of Christ’s cross does not mean that we are actually adoring the material image, of course, but rather what it represents. In kneeling before the crucifix and kissing it we are paying the highest honor to the our Lord’s cross as the instrument of our salvation. Because the Cross is inseparable from His sacrifice, in reverencing His Cross we are, in effect, adoring Christ. Thus we affirm: ‘We adore Thee, O Christ, and we bless Thee because by Thy Holy Cross Thou has Redeemed the World.’

The Reproaches and the Reading of the Passion

The Reproaches (Improperia), are often chanted by a priest during the Good Friday service as the people are venerating the Cross. In this haunting and poignant poem-like chant of very ancient origin, Christ himself ‘reproaches’ us, making us more deeply aware of how our sinfulness and hardness of heart caused such agony for our sinless and loving Savior. A modern translation of the some of the Reproaches, originally in Latin follows:

Three times during Holy Week the Passion is read – on Passion Sunday, Holy Thursday, and Good Friday. By very ancient tradition, three clergy read the three principal parts from the sanctuary: Jesus (always read by a priest), Narrator, and all the other individual parts. The people also have a role in this – we are those who condemn the Lord to death. Hearing our own voices say ‘Away with Him! Crucify him!’ heightens our consciousness of our complicity by our personal sinfulness in causing His death.

‘Lord, by thy Cross and Resurrection thou hast redeemed the world’

In the symbol of the Cross we can see the magnitude of the human tragedy, the ravages of original sin, and the infinite love of God. Lent is a particularly appropriate time to attempt to penetrate the true meaning of this sacred image represents through prayerful contemplation; and to study the traditions surrounding the Christian symbol of the Cross.

Looking at the Cross in prayer helps us to truly see it. Most Christians have crosses in their homes. Many wear a cross around their necks. Some of these are very beautiful, perhaps made of precious metal and embellished with jewels. The beauty of these devotional objects may emphasize the glory and the victory of Our Lord’s Cross; but too often representations of this central symbol of our faith are regarded primarily as decorative, and its true message is lost.

It is fitting that Christians glorify the Cross as a sign of Christ’s resurrection and victory over sin and death, of course. But we should remember each time we see a cross that the Cross of Jesus’ crucifixion was an emblem of physical anguish and personal defilement, not triumph-of debasement and humiliation, not glory-of degradation and shame, not beauty. It was a means of execution, like a gallows or a gas chamber. What the Son of God endured for us was the depth of ugliness and humiliation. We need to be reminded of the tremendous personal cost of love.

As Lent advances we contemplate the redeeming Mystery of the Cross which aids the Church in her pursuit of the renewal of the faithful. The image of the Cross may help each of us to learn more fully the meaning of Christ’s sacrifice, and how we are to imitate His example. We can hope that our prayers which focus on the Crucifixion of our Lord will help atone for our own sins and the many grave sins of our society.

The season of Lent is a most appropriate time for children of all ages to learn more about one of the most distinctively Catholic prayers: the sign of the cross. It is a visible sign (a sacramental) of one’s belief in Christ and of one’s hope in the redemption which flows from His Cross. Accompanied by the invocation of the Trinity (Doxology), ‘In the name of the Father, and of the Son, and of the Holy Spirit’, making a sign of the cross is a simple and beautiful form of Christian devotion. By making this sign both in public and in private we affirm our faith in Christ crucified and ask for His blessing and protection. It is also a gesture of reverence to the Blessed Sacrament.

This Christian sign is a very ancient one, mentioned by the early Fathers of the Church as being a habitual practice by the second century. Tertullian recounts that ‘in all our travels in all our coming in and going out, in putting on our shoes, at the bath, at the table, we mark our foreheads with the sign of the cross.’ This sign or mark on the forehead of consecration to Christ has an antecedent in Ezekiel’s prophetic vision of judgment, in which the Lord commands that a ‘mark be set upon the foreheads’ of the Israelites who cry out against the evil which surrounds them, so that by this mark God’s people were identified as belonging to Him and saved from annihilation (Ezekiel: 9:4-6). Other biblical references to ‘sealing’ God’s people with a sign on their heads are found in the Apocalypse (or Revelations) 7:4, 9:4.

Another form of the sign of the cross is made by the priest several times during the celebration of Mass and when he grants absolution and gives other priestly blessings, by making an invisible cross with the the first two fingers and thumb of his right hand extended. A similar gesture of blessing is made when a priest blesses religious objects (these objects used in worship are also called sacramentals), such as rosaries, medals, vestments and articles used used in connection with Mass.

Parents find that even infants can learn to make the sign of the cross, and try to imitate what they see family members doing at the blessing before meals even before they can talk. Try to encourage use of this sign at bedtime prayers, too, when you can explain what it means.

The two forms of the sign of the cross used by most Catholics are:

Some suggestions for helping to increase children’s awareness of this devotion are:

The Crucifix, Crosses and Symbols of Christ

The most quintessentially Catholic object of devotion is a crucifix-a cross (Latin: crux) with the image of Christ’s body nailed to it. Crucifixes are always found in Catholic churches and chapels over the altar and are always carried in liturgical processions. This image is venerated by the faithful in a special ceremony on Good Friday. They are a customary fixture in every room and office of Catholic institutions (schools, hospitals), and on the walls of Catholic homes. This form of representing the Cross of our Lord adorns Rosaries, prayer-books, private altars, vestments, and many other devotional articles; also the Pectoral Cross worn by a bishop as a sign of office. The Pope’s ceremonial staff has a crucifix attached to it (unlike an ordinary bishop’s staff, which is formed like a shepherd’s crook.) A crucifix is frequently worn by Catholics on a neck-chain.A less common form of the crucifix bears an image of Christ glorified, wearing the vestments of a priest and with his arms extended in blessing.

One way to help increase children’s reverence and love for Christ and his cross is to introduce them to traditional Christian symbols. Help them draw several kinds of crosses in addition to the Crucifix (with Christ’s body, or ‘corpus’) — such as the Chi Rho, the first two Greek letters in ‘Christ’ (looks like a capital P with an X through the elongated tail ), the Latin Cross, the Jerusalem Cross, the Greek Cross, the St. Andrew Cross (an X shape). You might look for various types of crosses in churches, on vestments, and in other places.

Introduce children to New Testament symbols of Christ such as the Lamb, the door, the lamp, etc., Ask them to draw these symbols themselves and then color them. Display them on the refrigerator or in their rooms after they have finished.