By MFC Youth
Posted October 8, 2013
In Sharing
God’s Unending Love2013-10-082013-10-08https://mfcyouth.org/wp-content/uploads/2020/01/mfc-banner-smaller-2.pngMFC Youthhttps://mfcyouth.org/wp-content/uploads/2020/01/mfc-banner-smaller-2.png200px200px
0
Once again, God has showed His greatness in molding young leaders as the District of Antipolo held their Nehemiah Leadership Weekend last September 14-15, 2013 at the Sta. Monica Retreat House, Antipolo City. This is the beginning of a more God-filled journey as incoming Chapter Servants from all over the geologically-challenged area of Antipolo emptied their hearts out and waited for God to fill them with His limitless love and guidance. Rains continued to pour down during the second day but that didn’t douse off the blazing fire in the hearts of the young missionaries-in-training who attended the said event. Entitled “Trailblazers” with the carrying verse from Joshua 1:9, the NLW was granted by God’s grace to equip the new servants on the basics of handling activities and by setting the right heart posture for battling the challenges of New Evangelization by the youth.

As a new Cluster Servant and a participant in the NLW last year, great things have happened not only in my spiritual life but also for the areas our District. We all know too well the perennial problem of having inactive members. Youth Camps are always being held, follow-up households and activities are being planned and carried out, fellowships have been frequent but we leaders sometimes still seem to fail winning the hearts and souls of our members. Now that Chapter Servants are already part of the more immensely-committed Core circle, the challenge for this is not merely your influence to the members but how will you let yourself be used by God to influence your areas. When I was a new Chapter Servant last year, I was really eager to participate in the NLW and other formation activities the community offered. It was an arduous journey: I was faced with looking for a job and furthering my knowledge by pursuing a graduate degree. Praying to God and trusting only in His grace, He granted my prayers and gave me both at the same time. Thanks to Him, on top of being a Chapter Servant,  I had a job based in the university and at the same time being a graduate student of the same institution (with an added perk of me studying for free). With these blessings pouring in, I have to use all of them wisely. I was a student, an employee, an eldest brother providing for my family and a servant of God in-charge of the spiritual growth of the Sacred Heart of Jesus Chapter in the Cluster of Cainta-Taytay. I believed in one and only one thing: that
where I was is God’s gift and that realizing I am blessed with so much, my only response is to give what I have to the people He entrusted me.

I can say that all my missionary life so far has revolved in only one concept: that God’s unending love empowers you. I have been blessed and privileged to become part of the service team in Antipolo’s NLW last year, where I was also a first-time participant. It was challenging in many ways. But God has been really pushing me to the limit. This year’s NLW was packed with a premium set of empowered speakers, people who have been allowing themselves to become vessels of the Lord to show His greatness and love to all. While there were many obstacles that we battled through when we were there (it can’t be helped), it was still God’s mercy that prevailed when it was finally finished.

There is a great difference when you are sitting at an event as a participant and when you’re going around as part of the service team. There is an incomparable fulfillment given by the latter that makes you want to glorify the Lord in every single thing you do – whether it’s wiping chairs or strumming your guitar’s strings. A privilege like no other to be used by the Lord to make other people feel His love and greatness and mercy. Two weeks post-event, I can still feel the jitters – keeping track of time, coordinating with many people, praying hard so that everything will be alright and so on. But if there’s one thing that this year’s NLW has taught me (aside from all the technical stuff), it’s to pray hard. Really, really, really hard. Deep inside, we know that God has blessed us with talents and creative brains that we are able to do many good things. But in order to do greater things, we must connect with the Lord in the closest way we can. We pray hard, we fast, we hear mass frequently, we listen to every word He says, we become the best person we can ever be. Really, there is truth in what [an] author said in one of his: “when we love, everything around us becomes better, too… because when we love, we strive to become better than we are.” God loved us first, and still loves us now, but our only response is to love the people He loves. And these people are our families, our schoolmates, our members, our fellow countrymen. If we love the same way God loves, He will fill us in ways and become limitless – limitless like His love and mercy. That at the point when what we want and want God wants is the same, that when God’s plans for us become our plans for ourselves – we feel pure bliss in His embrace. Our heart beats for God, our breath is for God, our lives are lived for God.

The NLW will just spark the fire in your heart, but it is God’s grace that will keep it alive. Praise Him because in me, the fire is still there, blazing, burning. And in no way will I ever try to put it out. Never.
With that, may His name be praised forever.
By Crisby Roaquin, District of Antipolo 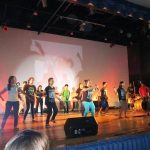 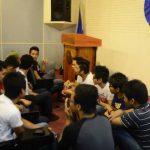